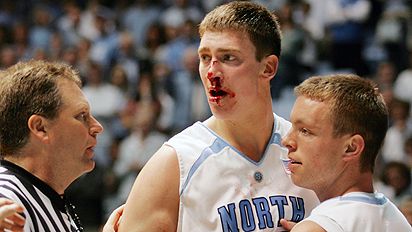 UNC Sophomore and alleged necrophile Tyler Hansbrough was injured Sunday while knob swabbing. Hansbrough, who earlier last week admitting to enjoying pedicures and butt-sex, said that he lost control of the knob and it came round and hit him in the nose.

Hansbrough said after the game, “You know, in my 2 years here at UNC I’ve taken a lot of shots in the mouth and even one or two in the eye. But this was the first I’ve taken in the nose.”

Here’s to a speedy recovery.

And Go to hell Carolina go to hell.

What’s the name of the city between Greensboro and Winston Salem that no one cares about?

Give up?
The correct answer is High Point, NC. If you didn’t know that, then perhaps you should check out Part 1 of my quasi-regular column entitled “Know Your NC Cities”. This week, we’ll see how High Point can change from a city I don’t care about to a city I hate.

Let’s get our learn on.

Here are some quick fun facts about High Point, NC:

High Point has a population of 92,000 people. Not too shabby. Even more impressive, the population spikes to 205,000 when Whitesnake performs at the nearby Greensboro Coliseum.

High Point sits at an elevation of 926 meters above sea level. Interestingly enough, that’s exactly how high you can stack shit.

High Point is the only city in NC that is spread among 4 counties; Davidson, Guilford, Forsyth, and Randolph. The city’s boundaries were drawn this way because the city’s high welfare burden was too much to place on 3 counties.

High Point leads the nation in moustaches per square foot.

The average temperature during a High Point summer is 82 degrees, which attributes to High Point’s ranking as the number one purchaser of above ground swimming pools and styrofoam coolers.

High Point has a booming furniture industry. Long ago the people of the region were too poor to purchase couches to sit their fat asses on, so they built them by hand.

Hope you enjoyed this installment of “Know Your NC Cities”.Â  I hope you learned as much as I did.Â  If there’s a city you’d like to know more about, let me know and we’ll get educated together.Â  Until next time…

All the flights are booked.

The Miracle on Ice. Douglas over Tyson. Now we have S-One-Dub over the Wagoneers.

In an upset that can only be described as miraculous, LT has been eliminated from Fantasy Championship contention. The S1W all-stars were able to overcome a strong showing by the league’s TD leader on the strength of Peyton Manning’s right arm. When reached for comment, S1W coach J. McGinnis summed it up best:

I’m no Athletic Director, but it would seem that in finding a replacement for Amato, we wouldn’t want to look for someone that he was actually capable of beating.

Just for fun, let’s look at the number of ACC Championships won by each team in the league:

For those with even the most elementary of math skills, the pre-Les Robinson numbers:

Just food for thought for any that believe we cannot compete. At 11:15 PM on Wednesday November 22, basketball season has officially began.Â  I know the NBA started a few weeks ago.Â  I know our beloved Wolfpack have started 3-0, but as I sit and watch ESPN2 I got a familiar feeling in my gut.Â

The 2nd ranked team in the nation isÂ down a dozen vs. the number 23 team and begins to make a run.Â  Cut to the crowd and there’s a sea of sweater clad accountants.Â  The burning begins in my gut.Â

Another basket by the favorite.Â  Cut to a chubby tough guy in a pastel blue hoody mouthing “that’s what I’m talking about” over and over.Â  The feeling intensifies, but I can’t quite place it.

The favorites continue the run by taking a charge.Â  Cut to the sidelines and the Too-tanned-for-November coach and his silk tie screaming at his team.

Seven months ago after the George Mason game, I put the hate away for the summer.Â  Now it’s back, and like and old sweatshirt, it fits as snug as ever.Â